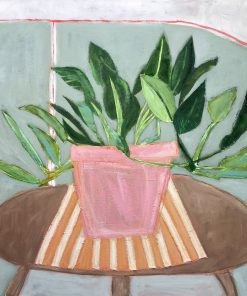 Throughout her childhood in the cultural city of Leipzig, Germany, Diana’s hands were covered in glue from her fondness for arts and crafts. Her mother was a devoted crafter, her father loved to paint and her family’s creative passions left an indelible impression on Diana. Early memories of sitting with her uncle, an acclaimed sculptor, modelling delicate flower petals from Play-Doh together at the kitchen table are still held with fond affection. While anything that was foraged on country walks would be used in Diana’s own artistic creations.

A successful corporate career followed, yet Diana’s passion for creativity endured. Her travels around the world provided a longed-for release from the rigours of her fast-paced corporate routine and reignited a freedom of expression that Diana craved. On settling in the UK and starting a family, Diana once more immersed herself in arts and crafts with her two sons, inspired – as she was as a child – by the organic beauty of nature.

This reawakening of her creative spirit prompted Diana to step away from her corporate life to immerse herself fully in her artistic passion.

Diana’s expressive mixed media works give a fresh, joyful twist to the simplicity of everyday organic shapes. Based at her studio in Oxfordshire and inspired by the countryside and nature around her home, Diana enjoys experimenting with local clay, chalk and charcoal collected on walks with her family. Intuitive, bold strokes, fine marks and textural layers, as well as a strong focus on collage are central to Diana’s collections.

Stop off coffee in Uig, whilst cycling the Outer H

I have always been mad keen on figurative painting

Our beautiful twin daughter Elena got married this