Turner and the Modern World 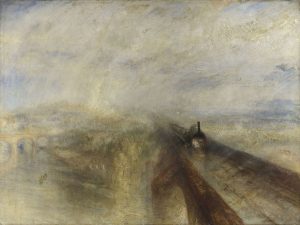 Many artists ignored these advances but Turner faced up to these new challenges. This lecture runs in conjunction with the exhibition which will be held at Tate Britain from the 28th October 2019 to the 7th March 2020.  The lecture will explain how he updated the language of art to produce revelatory interpretations of modern subjects.

Beginning in the 1790s, when Turner first observed the effects of modern life, the lecture will follow his fascination for new industry and technology through to his famous paintings of steam boats and railway engines of the 1840s. It also looks at his engagement with the Napoleonic War and the other major political events of his lifetime, including the 1832 Reform Act and the campaign against slavery.

Barrie will talk about major works of Turner from around the world, including The Fighting Temeraire 1839 and Rail, Steam and Speed 1844, and talk about what it meant to be a modern artist in his lifetime and present an exciting new perspective on his work and life.

Fresh off the easel, this beautiful decorative Cal

I’ve always had a passion for beautiful art & sp

New paintings coming in to replenish sold works by

We open our two man show tonight in Bruton, Somers

One of my many talented artistic sisters @daphne_s

In between a hectic time setting up two shows, a s